Normally on a Tuesday, I’m on my laptop working on one of my community music projects in a Coburg cafe.  But last Tuesday I laid that aside to do something a little different. At 2 pm, myself and a group of five others entered the Hastings electorate office of Health Minister Greg Hunt. We were there as part of a Love Makes A Way – an inter-denominational Christian group committed to non-violent direct action in support of refugees. It was first time I had decided to do a potentially arrestable action and one of my roles was to liase with the office staff. As we approached the office I felt butterflies having a field day inside my stomach – while I’m comfortable to sing and play guitar to a crowd of strangers, put me in front of a furious staffer and I’m likely to crumble.

Then the moment came: I opened the door, walked in and said hello to the woman at reception as casually as I could and then managed to get most of the words out that I wanted. It turned out to be easier in real life than in the role play, largely thanks to being verbally pummeled during the practice. The office lady was also nicer than expected and had almost made us feel welcome. I wondered if she’d understood when I said we were going to stay in the office until Mr. Hunt agreed to make a statement in support of bringing those in offshore detention to Australia? We all sat down in the corner of the tiny office and looked at each other – wow, that went better than expected! After all, a couple of the guys had experienced office staff (understandably) being less than friendly when they had done similar things in the past. 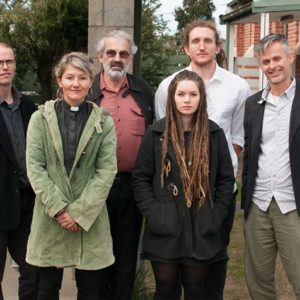 While the rest of the team pulled out our written reflective liturgy we were about to follow, I devoured my packed cheese and tomato roll and my body relaxed slightly.  Here I am, I thought to myself, finally on the ‘front line’ of a non-violent action. Before becoming involved with Love Makes A Way I’d struggled a bit with the idea of white middle class non-violent action, especially one that was exclusively Christian – it always seemed to have a whiff of self righteousness and black and white thinking. But when I looked a bit deeper I wondered if my own judgmentalism had been part of my reluctance to be involved in potentially arrestable actions. And my experience of the people involved in this movement took away any lingering doubts – they were not only highly committed and empathetic but they also didn’t take themselves too seriously.

As Mr. Hunt was having meetings all day in Canberra there were no constituent meetings booked – we pretty much had the office foyer to ourselves. In the next few hours, we chatted, sung, prayed and waited while we waited for the inevitable 5pm ‘showdown’ with police. We could sometimes hear our friends outside the office, who were also were doing their own rituals of song and prayer interlaced with symbolic arm crossing and lying on the ground. We felt very supported by them, knowing they were also in solidarity with the men on Manus Island who have used these symbolic gestures in their daily protests in the previous 22 days. It seemed hard for us to fathom how a Government that has subjected these men on Manus to the torment of indefinite detention over four years were now giving these vulnerable people an impossible choice – to go back to where they’d fled from or live amongst impoverished people who resent them and have sometimes been violent towards them. 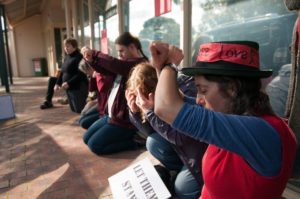 During those hours of waiting we chatted and got to know each other better at an everyday level. I learned that one of my fellow advocates could eat seventeen pieces of pizza without blinking. We also shared our life experience at a deeper level than is common, after all this was an intense shared experience with a lot of unknowns – the possibility that we might even end up in a police cell that night was not out of the question. One activist shared that they feared the day they would have to explain to their children why humankind had allowed the Holocaust to happen. Another shared that he had joined this action because he wanted to have something to say when his grandkids ask him in the future ‘why didn’t we stop what we were doing to those refugees?’.

My other role in the inside team, much more familiar to me, was to lead some singing. I led a few songs, including two that I’d written, one with the theme of facing fear, the other about hoping and praying for a world where kindness reigns. We shared about what it meant to be courageous. I quoted some unknown sages who said that courage is not about the grandiose acts of courage, but about the little decisions, it’s not about being fear-less but about feeling the fear and doing it anyway.

Just before 5pm one of the office staff told us that we would have to leave as the office was about to close. I reiterated our intention. She told us that she would have to call the police (the police had been called earlier but did not come into the office, which surprised us). Ten minutes later two local coppers arrived, the older policewoman telling us in no uncertain terms that we were now trespassing and that we had to go. When we made it clear that we were committed to staying until our goal was reached, she was quite offended.  She called for back up, and eventually we had six police plus us in the tiny room. They told us that Mr. Hunt had refused our demand and suggested we contact the Minister for Immigration and Border Protection, because this issue wasn’t part of his portfolio. So, I thought to myself, the Minister for Health had nothing to say about the awful rates of mental health damage, self harm, suicide attempts, physical and sexual violence committed against vulnerable men, women and children in our care?

When it became clear to them that we weren’t going to budge, they gave us the choice: either we walk out or they would carry or drag us out. While we weren’t aiming to be arrested, it was preferable to us than our action not getting any attention: nonviolent direct action, as Martin Luther King said, ‘seeks to create such a crisis and foster such a tension that a community which has constantly refused to negotiate is forced to confront the issue’. But they clearly had instructions not to arrest us, so they said they were going to physically remove us but not lay any charges. Although we weren’t sure about the legality of it, we were determined not to be violent, so we accepted this. As they carried me out and placed me on the ground I was greeted by my singing friends and a few cameras.  To the credit of the police they were not rough or violent in any way. And while not as dramatic as arrest, being carried out meant we followed through with our aim to not leave voluntarily. 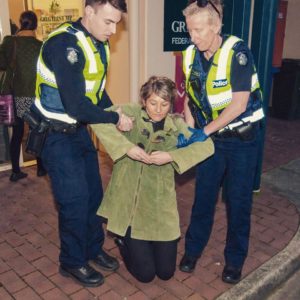 It was all very friendly after that, the sergeant in charge even wished us luck as his fellow ‘boys and girls in blue’ drove off into the cool Peninsula evening. We were left to reflect on our experience over dinner at the local pub. While it had not attracted mass media interest it felt like we had succeeded in so many ways – we had been non-violent, respectful and had worked together beautifully as a team. And, thanks to social media and church media this action would help to keep the issue in a few more people’s minds and hearts and possibly even inspire some. Most importantly we showed some solidarity with the refugees in offshore detention and felt part of a larger movement of people lovingly ‘chipping away’ at our national psyche of fear.  We struggled with the fact that things wouldn’t suddenly change for the guys on Manus and Nauru but we had that little extra bit of faith that in the not too distant future they will.

Next Tuesday I’ll be back at work but I won’t forget last Tuesday in a hurry.

INTERVIEWS WITH ADVOCATES WHO SAT IN OFFICE:

My slightly nervous interview two days before the action: https://vimeo.com/230726429